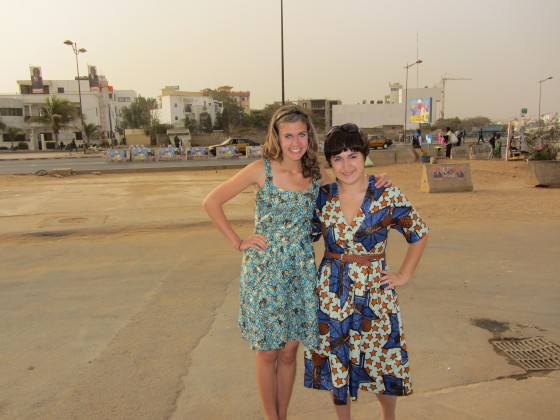 Unrelated to anything in this post, I have a new dress. (I'm the one that looks like Mrs. Frizzle on acid.)

So, my parents are in Dakar. It’s both delightful (I have missed them! They are staying in a swank hotel that looks like an Indiana Jones set!) and strange (They don’t speak French! Everyone thinks my dad is German for unknown reasons!).

Mostly, though, this trip has given me an insight into how little of downtown Dakar I have visited. This is not entirely due to my homebody ways–my program directors have managed to convince me that downtown is full of Riots, All The Time.

It turns out that that’s not true! (Knock on wood.) Mostly downtown Dakar is full of really good (if expensive) food and hilariously unsafe traffic. Also, there’s embassies. Like, twenty of them within a block of our hotel. I can’t tell if there was a meeting about it or if the tax rate in this part of town is great, but this place is internationally bouncing.

Sure, there are aggressive salespeople, but being with my parents has taught me that not knowing French (or pretending that you don’t) is actually a completely great tactic for getting out of those situations. After folks cycle through the languages they can try to sell you things in, they give up and assume that you’re deaf or from Budapest.

I was worried that my lack of knowledge of Dakar/the political situation/Dakar’s lack of things to do would make this vacation be one of those “Well, honey, it was good to see… you! In the hotel!” sort of things, but mostly I think that’s been avoided thanks to Senegal’s abundance of good, groundnut-based food for sale and my father’s purchase of a tiny Vespa made out of a soda can. (It goes with my tiny car rapide made out of a soda can. We’re a one-track family.)

The only part that has sucked is needing to read a bunch of articles for class/study/generally learn boring material during the vacation, as this is no longer my program’s actual spring break. That got canceled in light of the riots that aren’t happening, so I’m currently playing hooky. But if you’re going top play hooky, it should involve mafe, I think. (Also, Barcelona, where I am apparently going to be flying tomorrow! So psyched!)

Next up on the agenda: ebook, which should be out by the end of the week. (Hopefully. Tell your friends! Purchase my reasonably-priced life advice!) Number two on the list: drink a cocktail with coconut something in it. I am nothing if not a dreamer of big dreams.

2 thoughts on “Parents! In Dakar!”