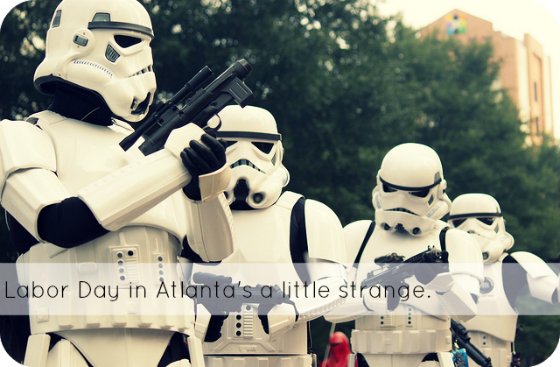 Image courtesy of Pat Loika. Licensed under CCY BY 2.0.

This happens every year. It is a delightful logistical nightmare. Several hundred thousand people with really intense, really disparate interests descend on a city that is an infrastructure nightmare at the best of times.

Labor Day weekend is, of course, the Best.

Normally, I confine myself to the quiet nerds at the Decatur Book Festival. They drink beer, (politely), and care about books (politely), and listen to readings (politely). They go home at 5. There are no after parties. But this year, I decided that I had to spend at least a day amongst the rowdier nerds: I was going to try to go to Dragon Con.

A bit of Dragon Con backstory: prior to this year, I had been to Dragon Con twice. I was 12 the first time and 13 the second, and at neither point was a chaperoned. It was terrifying. At the time (and this was 10 years ago, now), the con had somewhere around 17,000 attendees. It was crowded, and it was full of people in bondage gear, and it did not have anti-harassment policies on display. I got to see Anne McCaffrey speak, but made no effort to go back during high school or college.

This year, though, I vowed it would be different. After all, I’m an adult now, and I knew people who were going, and I am entrenched-enough in Atlanta that I knew how to leave if I needed to. Plus, I was going to try to go to some of the night events. The after parties are, after all, what make Dragon Con different from my beloved book festival.

So I went (by myself, as is my way). It was Friday, the first real day of the con, so I expected it to be a little quieter. To some extent, it was. However, as of 2012 (the last year for which starts are available), Dragon Con attendance was 52,000 people. A quiet day of the con is still a quiet day in what is essentially a mid-sized town full of cosplayers who have been drunk for at least the last 12 hours.

Luckily, though, the small-town Atlanta magic kicked in. Walking around with no particular plans, I ran into an old drama camp counselor, three coworkers, a kid I went to college with, a half-dozen people from the theater, a man who never returned my text, a housemate’s friend, and a smattering of assorted sundry other folks. I didn’t know half of them were going to be there. In a town of folks dressed as fantasy characters, I still managed to be surrounded by people I knew.

When I’m at the grocery store it can feel claustrophobic. When I’m lost in a convention center full of tens of thousands of people? It’s reassuring.

Eventually, I did meet up with the folks I had actually intended to see while I was there. A con-experienced set of coworkers took me under their costumed wings, and I was escorted around to an improv show and various concerts.

At one of the concerts, a bundle of drunk improvisors wandered in, which was delightful, and I was offered/told to drink flask-bourbon for the duration of a mid-level rock set by a man who didn’t remember any of it later. At the second concert, I saw a middle-aged man dressed as a pirate lead a few hundred people in a round of “Science Fiction Double Feature,” and I was unironically moved. I poured myself into a cab at two in the morning after having been at the convention for 16 hours.

I wandered to the book festival the next day, and drank strawberitas while dressed as Jane Austen, and ran into a different set of coworkers and former classmates and theater people. It was good, and I’m glad I went, and now I know what John Scalzi looks like. But I’m glad I dove into the Dragon Con madness, even if only briefly. Next year, maybe I’ll try the football thing.