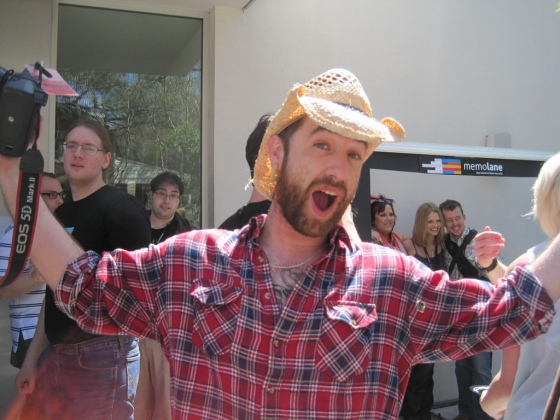 So much plaid, everywhere.

After my weird little half-week and a weekend back from Spring Break, I am fully readjusted to not living out of a suitcase (yay!). I am not the sort of person who does well with traveling–somehow my clothes always wind up smelling weird and I wear the same outfit six time even though I overpacked. It’s not attractive.

I spent the break, along with two additional being-a-truant days, in Austin with Kelly, Shep, and Laura from HackCollege exploring the unconference aspects (ie, networking and parties) of South by Southwest Interactive. I was glad the trip wound up happening in part because it gave me an excuse to see some relatives I have not seen in several years, and because it involved tacos*, which are one of those foods that are delicious and that Georgians just don’t do.**

It was not quite what I expected, to be honest. Part of that was related to the fact that SXSW really is a trade show for an industry that I don’t work in, and years of attending the very fringes of CALI with my family have taught me that that’s pretty much always going to be kind of boring. There was an additional level of weirdness attached to the fact that Shep and Laura and I were pretty much the only college kids we interacted with there, and there’s nothing to make you feel like a fake adult quite so quickly as interacting with people in their late 20s who are much smarter and more creative than you have any hope over ever being. I had also been told that SXSW parties are Harrrrrd Corrrrrre, and at least in my experience that wasn’t the case. The nerds are not so much with the dancing. (Then again, my friends are famous for throwing parties in which everyone carries on without pants and with glowsticks, so I am perhaps biased/bad at parties.)

I am tremendously shy and bad at speaking up for myself when I’m being bothered, so that probably impacted my experience. While talking with Laura, we also decided that the experience might have been more rewarding for us in part if the conference attracted more content creators rather than developers, since we’re the former. However, we both realized that that was kind of like critiquing a burrito for not being a quesadilla–it’s not really the poor thing’s fault.

But, there were some pretty awesome things that I got out of the experience:

Overall, it was a cool experience. It got me out of the Oxford bubble, which though safe and comforting and where I usually like to be can also be petty and insular and give you an inflated sense of your own self worth. It’s nice to be reminded that life exists outside of your college, particularly when you’re doing your baby graduation in a month and are kinda freaked out. I probably won’t be going again next year, since I will hopefully be in Senegal and learning about what college kids do there. However, I’m glad I went instead of spending the week napping on my parents’ couch. It was a weird little baby step towards some vague kind of independence. That kind of thing is helpful!

* It also involved fried avocado, post-birthday carrot cake French toast, and migas. So good.
** To defend my countrymen, however, I will argue to the death that Georgia barbeque is better. Suck it, Texas.
*** Which I was pretty sure was not gonna happen, but the hell do I know. I can get annoying if you share a room with me for a week. They could have snapped!

3 thoughts on “Lying to Bouncers, Dancing with Nerds: SB ’11”