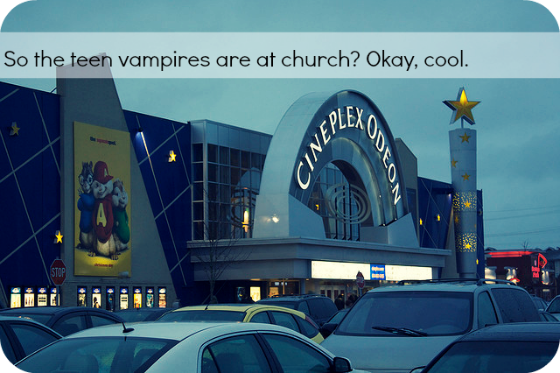 Image courtesy of Gibsonsgolfer. Licensed under CC BY SA 2.0.

I occasionally joke that I don’t watch movies. There’s some grain of truth in it—I much prefer TV, if given control of the Netflix account—but just this week I saw two separate films in theaters, and another a few weeks before that. The issue is that the movies that I pay an unholy amount of money to see are not just a little bit embarrassing to disclose.

I haven’t seen a single serious film this year, but I have managed to see Frozen, The Lego Movie, and (most camp-fabulously) Vampire Academy. The first two made me cry. For all that I give off the impression of being a terrible snob, I delight in some particular campy-awful aspects of pop culture. I bored a coworker half to death with my Feelings* About Teen Vampires the other day, and then managed to fail to get a Big Lebowski joke***.

(Maybe it’s because I went to a Methodist school. They’re so earnestly nice, guys. So nice.) END_OF_DOCUMENT_TOKEN_TO_BE_REPLACED