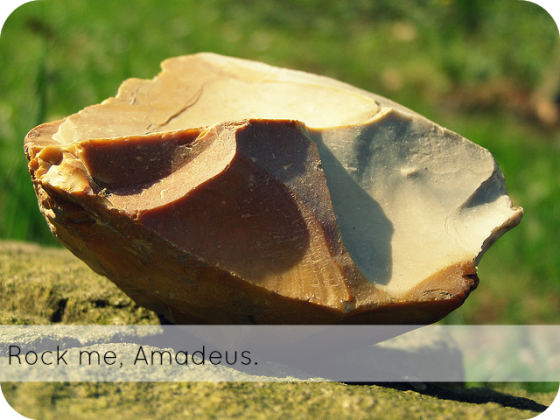 As promised in last week’s post about not losing your time in a fog of Netflix and malaise*, I spent part of this weekend at the North Georgia Primitive Arts Festival/Knap In. As expected, it was fairly small and uniformly delightful. Y’all, it is a truth well established that festival folks in general are friendly, and rural southern festival folks even more so.

You want to feel loved? Haul out to the Georgia Apple Festival, ignore the warnings about chewing tobacco causing mouth cancer, and eat an apple fritter with someone who makes wreaths out of bullet casings.

So, I was just delighted to find myself with my two classmates and professor on a Saturday morning, heading out to Cartersville to hang with people who like to make their own arrowheads, and–in the case of the primitive bowhunter side of the festival–their own arrows and bows, and then shoot deer with them. We rolled up–one of the few cars that wasn’t a truck–around 11am, and headed on in.  END_OF_DOCUMENT_TOKEN_TO_BE_REPLACED

Oh yeah, I also performed in this year’s Emory Drag Show. So that was a thing.

So, I may still be playing Christmas music on loop in my (fixed!) car, but this weekend managed to cheer me up at least a little bit. This was due in no small part that I (hold on to your hats, here) went to a street festival over the weekend–Cabbagetown’s own chili cook off/excuse for bluegrass, the Chomp and Stomp.

Though I didn’t partake in any of the chili, I was in the minority. The way the festival was set up, interested folks paid $5, bought a spoon, and walked around to any of the kajillion chili booths to receive a cup of whatever they were serving. One street had restaurants serving up their versions, and another had individual competitors. It would have been impossible to try everyone’s without exploding, I think–there were easily 40 booths on each street.

Since I passed up the chili, I snagged some cheese tamales from my family’s favorite Mexican restaurant in town, Mi Barrio, allowing me to continue the weekend food theme of cheese ‘n carbs. Most of the Mexican food in Atlanta can’t hold a candle to what you can find literally anywhere in Oklahoma, but Mi Barrio is certainly a contender. Plus, it was $5 for two large tamales, which is pretty much the best thing. END_OF_DOCUMENT_TOKEN_TO_BE_REPLACED