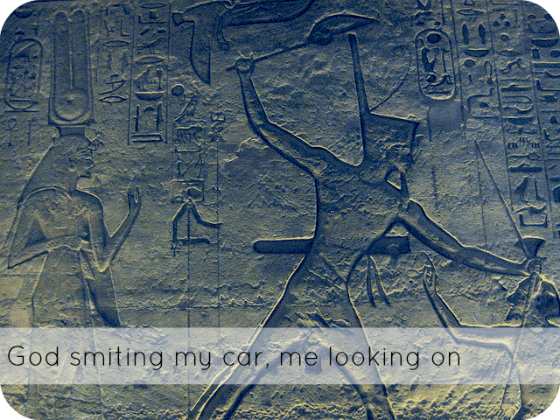 It has been an unfortunate vehicular month for me. It started with the totalled Honda Civic, marring a 7-year incident-free driving record and convincing me that I should never leave work on my own, because clearly god will smite my car.

Earlier this week, I decided that that was silly–if so inclined, I should go eat dinner on my own. Plus, I had forgotten to bring any food and there weren’t any office snacks that I could steal.

I had, since the accident, been driving my father’s car. It’s also a hybrid Civic, though in a different color scheme. It had served me admirably by not being totalled.

I blinked my eyes, hoping that perhaps I was just hallucinating. No such luck.

Another coworker–the sort of person who can remodel their own kitchen and who you generally want around in these sorts of situations–was in the lot with me. I called him over, to confirm that it was in fact broken. He had me pop the hood, so we could see if–hope against hope–the bumper would just snap back on.

I popped the hood, at which point the dislocated bumper shuffled off its particular vehicular coil and fell to the ground with a thump. It was the establishing shot of some sort of quarterlife crisis movie, something to help you know that the protagonist really doesn’t have their life together.

As best as we can tell, someone (building employees, a coworker, elves) whacked the side of the car while pulling through, knocking the bumper off the car. Perhaps they had heard tell that I was thinking of going to lunch again, and needed to put a stop to it.

My coworkers, kind folks that they are, stuck with me to put the bumper into the car and help back up my story while I filed a police report. The cop, who looked to be about the same age with me, said possibly three things during the process. One of them was, “That sucks.” One stuck with me after work, and–using some Apple cabling that no one has an adapter for–helped tie up a loose flap of rubber up away from the wheel. It has stuck for a week, which is an impressive testament to his Boy Scouting abilities/Apple cabling.

I have decided that, for the rest of the year, I am eating lunch at work.

One thought on “Sorry about that , second Honda Civic”