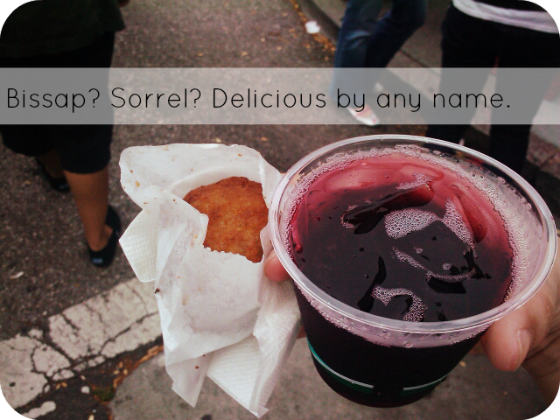 I have a complete fascination with the processed foods of other nations (see, for example, my love of choco paste). So, when a friend and I found ourselves in a grocery store late at night this Friday and looking for breakfast taco supplies, we took some time to explore the Jamaican/Mexican food selection next to the tortillas. Part of what makes that aisle section interesting is that it is so small, and varies from store to store–why, exactly, is Goya ginger beer always in stock at my local Publix, but not at the Kroger down the way, for example? Why this particular brand of Mexican hot chocolate, or corn masa, over another?

I’m always curious of Jarritos really is so common in Mexico, or if it’s just a Cheerwine equivalent that’s gained a really good distribution deal. (The internet informs me that it really is that popular, and also that in Mexico the hibiscus flavor is sold as “Jamaica.”)

We came away with three new things to try: the alarmingly-named Big Bamboo Jamaican Irish Moss Peanut Drink, Aloe Drink, and a bottle of sorrel and ginger juice.

Fortified by pumpkin beer, we decided to dive head into the taste testing with the peanut drink. We were not totally sure what to expect from something that had both “iron” and “peanut” on the label, came in an aluminum can, and instructed us to shake “gently.”

Imagine, if you will, what you might get if you blended natural peanut butter with sweetened condensed milk, and then did whatever needed to be done in order to make it shelf-stable. Because that’s kind of what was happening in that can. It was not bad, but it was just a combination of flavors and textures that does not show up in American cuisine all that often. We drank about half a can before giving up–it didn’t help that we’d read the calorie count on the back (280 for a can).

Discussing this with my dad the next day, he suggested that it probably would be good with rum, and I can’t disagree. Someday in the future when I’m feeling more adventurous, perhaps I’ll toss peanut drink in a blender with some ice and Captain Morgan and have myself a party.

Slightly off-put by the peanut drink experience, we moved on to the aloe drink, in the usual fluorescent green packaging that indicates “aloe-flavored” in the parts of the world where that’s a thing. The aloe drink was actually pretty great–it was slightly more viscous than one might expect (which makes sense, given aloe’s ability to function as a vegetable food thickener), and slightly lemony. It had bits of aloe pulp in it, which were pleasantly chewy. We finished the whole of the aloe drink quickly, in part because it helped wash the peanut drink taste out.

Finally, we moved on to the sorrel tea. I had cheated a bit with it–when I was living in Dakar, I drank a ton of bissap “juice” (it’s really sweet tea), which has a characteristic blood red color. After about a month of living there, I realized that it was made from hibiscus flowers, which seemed to be what was on the label of the sorrel drink. It turned out that my guess was right, and that “sorrel” tea is really hibiscus tea. The Jamaican hibiscus drink was my personal favorite, as it combined the insane sweetness of hibiscus tea with ginger, which was a refreshing change of pace after the one-note sweetness of the other two drinks.

I enjoyed a weird peek into the processed foods of Jamaica and Asia over the weekend–hopefully, somewhere, there’s a foreign exchange student hanging out in a Kroger, trying to figure out whether Cheerwine is alcoholic, or why in god’s name anyone thought watermelon oreos ought to be a thing.