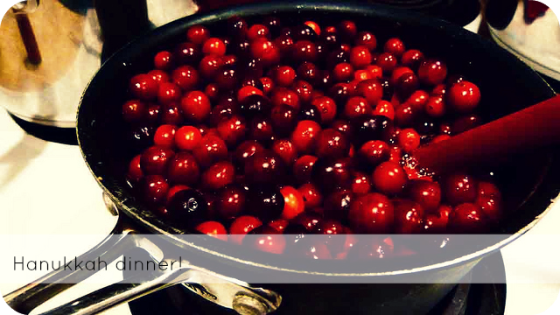 This weekend, my family celebrated Father’s Day by–as is our custom–eating entirely too many delicious egg-based foods for breakfast. This freaked out the table next to us, since Father’s Day isn’t actually until next week.

The mixup happened due to a combination of familial paranoia and inertia. We did figure out that it was the wrong Sunday due to the magic of Google, but at that point we were all excited for brunch and figured the lines would be shorter anyway. Problem solved!

This is not the first time that my family has willingly changed a holiday date for convenience. When I was small, for example, I didn’t realize that Thanksgiving and Hanukkah weren’t actually the same holiday. (There were not many other Jews in Tulsa with whom my sister and I could compare notes.)

Originally, I think this stemmed from a scheduling conflict. My branch of the family spent the time that would have been used for Hanukkah with my dad’s family, who celebrate Christmas. As a trade-off, we went to my mother’s family for Thanksgiving. My grandmother, being pragmatic, decided that we’d just do Hanukkah then.

By the time my first cousin was born, I was 8, and the tradition did not budge. (This despite the fact that that side of the family, being practicing Jews, most likely had to have some very confusing conversations with their children.) We celebrated Hanukkah at Thanksgiving until my maternal grandmother died, at which point my family began celebrating a more traditional holiday.

Given that Father’s Day is really there to celebrate one’s family, it seems ripe for flexibility. Brunch–the reason for the season, as far as my family is concerned–can be eaten at any time. My dad seemed to enjoy his Mondo Baldo t-shirt as much as he would have if I’d waited a week to pass it on.

By the by, the amount of enjoyment that he should pull from that shirt is substantial. The Mondo Baldo t-shirts are t-shirts for bald people (men, women, kids, and infants). I bought mine at the local farmer’s market from the man who makes them. He is–as you might guess–very intense, and quite bald. He donates a portion of his profits back to alopecia and cancer research. He appears to be a cool dude, with the conviction of a hairless prophet.

Perhaps next weekend we’ll just celebrate Father’s Day again. (Brunch is, after all, delicious.) I’ll have to find another t-shirt, though.

One thought on “Changing Holidays”