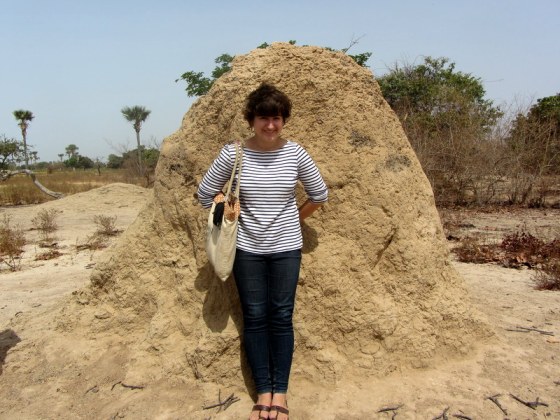 Hanging with the termites.

I’m officially back from the Sine Saloum delta, ie your friendly reminder that everywhere in Senegal that is not Dakar is staggeringly beautiful.

This was a whole program trip, so all 60 of us rolled up after a three-hour bus ride on Friday. We then took pirogues (think 30-person canoes) over to our campment, which was composed mostly of thatched-roof, solar-powered cottages and hammocks. It was populated by increasingly ridiculous birds–think two-foot-long irridescent blue things, and songbird-sized hummingbirds.

While settling in the first night, I bought some jewelry from a Tuarag silversmith. The man was six feet tall and all done up in blue robes (the Serer women next to him were not thrilled, as no one looked at their wares). The jewelry is lovely and, you know, desert nomad.

We polished off the first night with a pirogue tour of the mangrove swamps from which the local Serer villagers make a living through sustainable oyster harvest. There were pelicans and three kind of heron and just a general reminder of the best parts of Louisiana.

As an additional bonus, I am told that the fish we ate was barracuda. Also, whole shrimp. It was a weekend of truly awesome seafood.

The next day, we set of on horse cart tours of the nearby villages. It was both cool and vaguely uncomfortable in a “this feels colonial” kind of way. In one of the villages, we saw infant hyenas which the villagers had captured and were keeping in a pit. This was somewhat distressing. Our horsecart driver said that the hyenas are raised to adulthood and then sold to the national park, so hopefully that was true and the hyenas will live out a long, happy hyena life mostly far away from people.

That night we walked back over to the nearest village to watch the local wrestling match. Unlike the national matches (which I still find boring), this was pretty fun–we were near the griots, who sang and drummed the whole time, and the energy of the crowd was just fun to be around. The small children seated around me attempted to teach me Serer (it failed) and were fun to watch, since they knew most of the wrestlers and had clear favorites. The folks around us spoke French and explained what was going on. A good time was had by all.

The walk back to the campment was one of those rare reminders in my life that the universe is incredibly big. We were in a field that was completely flat, without trees, for a mile or more across. There was a completely unfettered view of every star in the sky. It was beautiful and made me a little nostalgic for watching the stars at my itty-bitty first college.

The rest of the evening was a delightful mix of sobriety (me), drunkeness (about 70% of the program), and games of “never have I ever” (everyone). During skinny dipping, folks discovered that the water was full of biolumenescent algea.

Returning home the next day was mostly uneventful, though we did stop by the largest baobob in Senegal. The inside of the tree is hollow, and so–if you wedge yourself very carefully through a very small hole–you can go inside. I did, and though it was mostly boring (it’s the inside of a tree), there is a large bat colony that inhabits the top of the tree. That one made my nine-year-old-self’s head explode, in a holy crap, bats! kind of way.

I’m still a little out of it since getting back into town, since I didn’t sleep much this weekend. I did, however, have the time to get devoured by mosquitoes–at last count I have 17 bites on my arms alone. This is one thing that I will not miss about living here, the beautiful birds and beautiful river and beautiful weather aside.