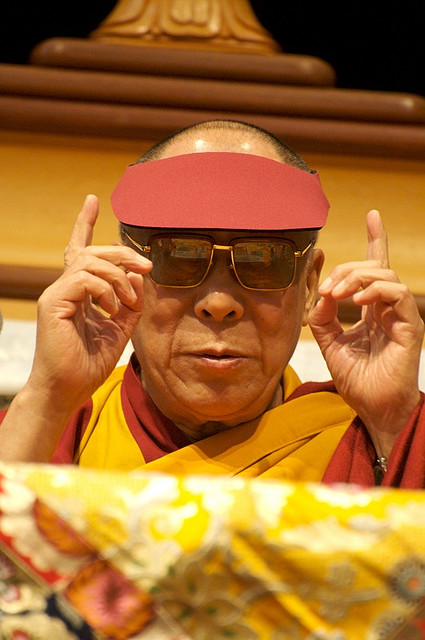 It has been a busy week, what with it only being Tuesday. First off, today I saw the Dalai Lama speak at Emory, which was pretty sweet. (He had a tiny sun visor!) Plus, tonight my residents managed to fill a UNICEF box in literally five minutes. They are the bomb! Plus, my OpenStudy blog post went up and I registered the Riot Campus domain and life is good.

While at Emory after the Dalai Lama talk, my cohorts and I ran into literally every frickin’ junior at the school that we knew. It was kind of insane. The non-Oxfordians were wondering who the hell the screaming people in the sweatpants blocking the aisles were, I’m sure.

There was an uncomfortable run-in with a member of our group and her Atlanta campus ex. She came to our table, somewhat irritated: “I wish I could quit feeling! I just want an off switch!” I do not know this girl that well, so I didn’t say much, but I wanted so badly to say that I felt her pain. I have been there! It took me six-ish months and a lot of my life becoming awesome to not be there! And even now, with the knowledge that it was a bad relationship and I am better off single and holy shit how awesome is my life right now, even with that, when I saw my ex’s best friend sitting in the chairs behind me today I started to feel physically ill. I don’t think it ever goes away entirely.

Of course, it’s entirely possible that it does and in a year or ten I won’t remember who this kid was or anything that happened even if it turned me into a comatose wreck for three months and ruined what I had previously considered one of my most valuable friendships. It’s entirely possible, because guys, three months ago I would have not believed that I would ever feel this happy again and six months ago if you had told me that I would have thrown a bottle of gin at your head while crying. (I have very accurate aim in these kinds of situations.)

It’s not like my life has been coming up roses completely and utterly ever since that relationship ended (for instance, there was the boy who I rebounded with who dumped me at 4am on the dance floor at my best friend’s birthday party and then stayed to hit on my friend), but the hurts that I feel are new hurts, and the joys that I feel are new joys, and gradually the things that meant so much to me a year ago or six months ago or three months ago quit mattering so much.

It starts feeling like things that happened when you were a kid–like learning to ride a bike. You know you had to do it at some point, and you may even remember it happening, but more than likely it seems like there’s a camera involved, that you’re looking in on a memory because it’s been so long and it’s been shaped by so many other things. I remember kissing this boy for the first time, and I remember how it felt when he held me, and I remember what it felt like to be constantly attached to my phone waiting for text messages from him, but none of that conjures up any real feelings. I know I was happy, and so I’m sort of reflectedly happy–but it’s happiness at the memory of the event, rather than at the event itself.

So, I don’t know if there’s ever an off switch. But you do, after a few months of bad decisions and anger and throwing gin bottles at well-meaning internet viewers, get to put Vaseline over the lens of your memories. Things hurt less in soft focus, and you go on to bigger and better things, and your life changes and if you have any luck at all, it gets better.