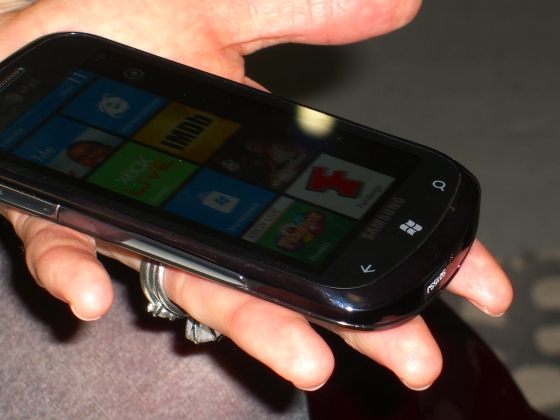 Windows phone 7 was the star of the event. It was, to its credit, very pretty.

As you saw last week, I was able to interview Steve Ballmer as part of the Microsoft Open House. But that was really a small portion of the overall event. Most of the day was spent on the launch and demonstration of the new, the shiny, Windows Phone 7. Microsoft will be releasing three of the phones on AT&T for $199.99 in the coming months, and there will eventually be 9 phones released–the next carrier set to get them is Verizon, which will see them next year.

Before we start anything: the new Windows 7 phones don’t have a copy and paste feature. They will get it starting next year.

Moving on: Microsoft completely overhauled the Windows Phone interface for Phone 7, and it shows. The focus of the new phones is on the devices as extensions of people. As a result, it’s possible to add individual contacts to your desktop as apps. Their app will update with their latest Facebook or Windows Live updates, so you don’t have to enter into the app itself to see what your friends are up to. Unfortunately, the contacts apps aren’t integrated into Twitter–and the Microsoft representatives were a little cagey as to when (of if) that would happen. There is a dedicated Twitter app; however, it’s not dynamic at the main screen level.

Read the rest on HackCollege.